The main character of the picture - is a musician from the of the same name literary work
of V. Orlov.

The space of the picture is filled with a portrayal of the internal state of the soul musician at the time of execution of a musical work. This world is filled with symbols of the inner unconscious, prototypes of ideas and feelings. All of this has not yet processed through the consciousness of words and concepts, and, of course, is not materializes. Thus, it is the inner space and is a tool for creativity, and is the creative beginning. The figure is surrounded by symbols of the musician. Top right is the symbol of force and energy, resembling a model of atomic nuclei and force fields. At this same time, is a particle chaos of the universe contained in each person and is a source of inspiration. This element acts as an energy source of process.

Energy waves are arranged in an orderly, in accordance with the rhythm and harmony of music, indicating by musical notations above and below the picture. Upper fragment is positioned precisely between the musician and his hands, is the result of creativity, directed into the outside world, and the bottom fragment - along from the viola, and symbolizes the voice, the soundof the tool.
All of three levels of audio series are marked with different colors.

Viola, in spite of the fanciful and surreal form, is the subject of a reality, and marks the boundary of the real and non-real

Communication a musician with his instrument is the visible and naturalistic, shows by incredible string-rays from the person to the instrument.

A candle flame on the deck of the viola - it is the real object, but the other two candles at a distance are a kind of "failure in the existential "as well as the flame of the candle is unreal forms, in which only guessed some sinister and not very human face. It's like a third layer of the picture, the intuitive and the unconscious, the world is dark and undifferentiated concepts. 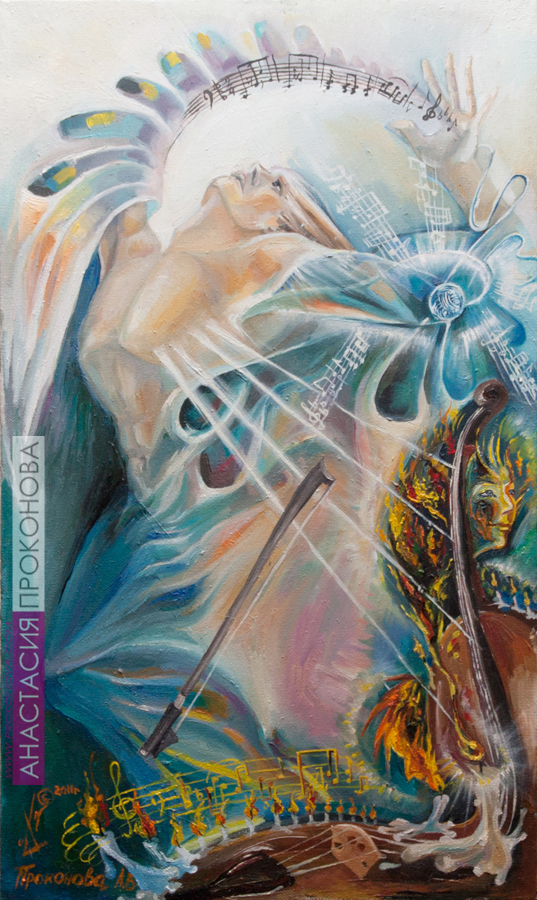